Tips for writing a dnd campaign

Your major secret plot in this case is that a noble house from Kingdom A, disgraced and exiled to one of the island nations years ago, has wormed its way into a position of power in Kingdom B and is fomenting war between the two.

It's the only way. Anyways, what are some tips for writing a good story intro for a campaign? At some point they will face a situation requiring a choice, generally a choice to keep following their patron power or break away from it.

It sounds like you've done a lot of prep and campaign work, so I'll address from that angle rather than arguing over the "correct" amount of prep, which these threads seem to devolve into.

Ask them to write an NPC or two that they have a connection with. 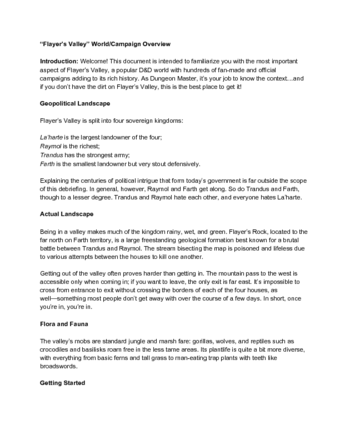 And now the group has a thread that ties them together - they are all wanted men and women and being hunted. And I don't need a lecture about what not to say.

Rated 6/10 based on 93 review
Download
How to Make an Enjoyable D&D Campaign: 12 Steps